Skye Rotter is the main character of the Super Psycho Series.

High School has been hell for Skye. She is intelligent and beautiful, but being the daughter of infamous serial killer, Charlie Rotter made her the class outcast with little chance at happiness. That changed when football star Brigg noticed her at Madison Penrose's Sweet 16 two years ago. Her father's horrific return that night caused Skye to be caught up in a trail of murders that she finally stopped by killing Charlie herself.

After that horrid night, Skye left to begin a new life in anotherr town where nobody knew who she was. She confronted her mother and found out she had a sister, who seemed to not be so accepting of her right away. Just as things seemed to be improving, Skye had gone to the party her sister decided to throw in hopes of becoming more popular. Things went well but eventually after enough drama, Charlie revealed himself to be very much alive. Once again, and for the final time, Skye confronted him and killed him.

Brigg and his family helped her through the nightmare and now Skye is finally getting a chance at a new life by going to art school in New York City. But Skye is about to learn that the party isn't over. A single phone call will plunge her back into the darkness...and the ultimate fight to end her father's legacy once and for all...

Skye is being harassed by Kevin one day in school when his friend, a popular jock shows up to defend her and eventually Kevin leaves. Skye and Brigg begin to talk for a while, then eventually split up. Later after swimming in the schools pool, Skye heads into the locker room to find paint all over her clothes. So she is forced to wear the towel she had on and goes outside, where Madison and her friends are. She mocks Skye before threatening her to stay away from Brigg, then takes her leave. With no other options Skye leaves for home, where Brigg finds her and offers her a lift home. Initially she turns it down, due to Madison's threats but Brigg convinces her that they broke up and he doesn't care about her anymore. Things go well between them but Skye already thinks it wouldn't work out due to her being an outcast and he a popular guy. He convinces her that he isn't like the others and asks her out to hang out with him that weekend.

The following day at school as Madison and her friends hang out invitations, Madison takes advantage to flirt with Brigg right in front of her.

Later Skye hangs out with her best friend, Derek, who is trying to convince her to crash the party with him when someome comes to the door and she gets up to answer. Brigg explains that he has to cancel the date while trying to explain that it is because Madison is depending on him to come to her Sweet 16 party. Skye feels hurt but she claims she is fine and understands. Before she can head back inside, Brigg kisses her and takes his leave, after assuring her that they can go on a date right after the party. And so, Skye decides she wants to crash the party with Derek shortly after.

Come time for the party, Skye and Derek easily sneak in and keep to themselves in the crowd of people at the rollerdome. After she sees Brigg, Skye goes to hang out with him for a while, clumsily skating around and just sitting to chat. A while later, Kevin mentions having seen Derek and Skye and then goes to prank her by pretending to be her father. She quickly storms off, just in time as Rotter then kills Kevin. Chloe and Olivia decide to prank Skye as well and try to trick her to go into the bathroom, where Chloe awaits, ready to prank her.

Instead Skye walks off after the drink gets spilled on her and she tries to contact Derek when she suddenly finds Brigg and Madison together. Thinking they were making out she leaves the room in tears and resumes trying to contact Derek to tell him she's ready to leave. In a fit of anger she throws her cellphone and breaks it, right before finding a shocking sight...

Later during the cake reveal, Skye sees the decapitated corpse of Olivia's and stays inside the building while all of the other partygoers run away out of fear and shock. Madison begins to yell at her while Rotter suddenly shows up. Skye grabs Madison's hand and the two girls run for their lives until they are eventually taken to the storage room of the rollerdome. Madison begs for Skye to talk to her dad, to save herself but Skye claims to have already tried. Stating that Madison is a bad person who has to pay. Madison tries to play on symphathy and it works for a moment when Skye stabs her dad in the knee with the knife he gave her to kill Madison.

But while she unties Madison from the chair, Madison berates and threatens her, then proceeds to throw Skye to the floor. Rotter grabs her ankle, causing her to trip but by the time she could get to the door, Skye locks her inside and leaves. As she exits the rollerdome, Skye informs the police that Madison was in the basement with her father and goes outside, ignoring Derek. She steals Madison's car and drives off...

Skye awakens from a horrible nightmare to find herself still in the car, right outside of a car dealers waiting for it to open. She goes inside and tries to reason with the man, who offers to take the car but right away notices something is wrong. They make an eventually agreement, involving a somewhat better car, 500 hundred dollars, and he promises not to call the cops. So Skye takes the offer and drives to a nearby town where she confronts her mother, who had abandoned her shortly after birth to begin a new life. Eventually her mother realizes that Skye needs help and offers to let her stay with them until she can figure something out.

When Alex comes back inside shortly after, she immediatly begins to argue with her mother over the fact of not knowing she had a sister. At first there is trouble between the two girls but Skye doesn't make a big deal out of it and over time they begin to grow a little closer.

One day Skye checks her email to see she has gotten a message from Brigg and Derek. She informs them she is fine but asks them not to come and look for her. She then sees that her father was never caught but before she can look into it more, Zoe came into the room and she quickly closes the laptop before taking her leave.  Later while at the Coffee Shop, Zoe confronts Skye about the information she found and demands that Skye brings her Alex's medications, or else she threatened to tell Alex about the information. Skye has a momentary day dream where she stabs Zoe in the neck with the drawing tool she had been using, only to snap out of it and remain quiet.

Later, Alex brings Skye to the Boneyard, where the party would be taking place. Eventually Skye agrees that it looks really cool, and awesome, which makes Alex very happy. Later after she recieves a present from her mother, Skye has a horrible nightmare where the corpse of Madison comes back to haunt her.

Eventually the secret party begins and soon Alex notices that Skye isn't having that much fun and confronts her on it. Skye admits that it was her birthday and Alex asks about this but Skye mentions that she isn't really one for parties. After the two girls seperate she is soon confronted by Zoe, who asks her if she brought the medications like she asked. Skye tells her that they should go elsewhere first, then begins to inform her that she could easily kill her, and nobody would know. Just as it seems she is about to push Zoe off of the steps, she hands her the pills and leaves after contemplating if she is a bad person for letting Madison die.

Skye sees Brigg and she asks him why he didn't just listen to the email she sent, but he assures her that he would have never stopped looking for her. They go further into the club, mostly away from other people and begin to makeout. Brigg is ready to leave when Skye informs him that she wont be going back with him and Derek, which makes them argue for a moment until Derek and Courtney come inside. Courtney, who is very jealous of Skye then begins to berate her for making people suffer. As Derek tries to calm her down, Courtney ends up blabbing the secret straight to Alex as a way of revenge on Skye. Alex then storms off and Skye tries to explain everything to her but soon finds herself in a strange room, where she finds an even more alarming message on the wall, wrote in blood. It's then she hears Courtney and Derek outside and eavesdrop on them, but she is soon distracted by Rotter, who shows up and begins to speak to her. Upon hearing Derek and Courtney yell, Rotter goes to take care of them. Skye tries to stop him but he locks her into the room, so Skye tries to yell for Derek but its no use and soon both he and Courtney are killed.

Skye only mourns momentarily before she finds her own escape from the room. Everyone in the club soon begins to panic after Zoe is lit on fire and runs out of the club while Skye finds Alex under the captive hand of Rotter. Skye tries to reason with him as they go into a new area. Their mom shows up and she informs Rotter that Alex is also his child, at first he doesn't believe her but she explains to him that she left while being pregnant with Alex. She then begins to yell at Skye while wishing she was never born, which makes Rotter snap and slit her throat.

Skye is a very intelligent girl who seems generally friendly, but knows she isn't very well-liked and is considered to be an outcast. While she doesn't like it, she has grown from such experience and realizes this as her role in life as she grows up. Even when Brigg showed an interest in her, she thought lowly of herself and thought it was really strange for him to like "someone like her" until she got to know him.

She is somewhat sarcastic, especially when dealing with the people who harass or mock her. But to those she considers a friend, she is actually very nice to them and has no problem joking around with them.

Despite everything she has been forced to deal with, Skye still shows mercy on Madison near the end of first film and tried to save her from Rotter. But while trying to help her, Madison began to threaten and berate Skye. Skye then responded by locking her in the cage to let Charlie kill her, which she has shown deep regret over in the following film.

Her best friend is Derrick 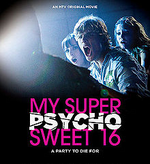 Add a photo to this gallery
Retrieved from "https://mysuperpsychosweet16.fandom.com/wiki/Skye_Rotter?oldid=4959"
Community content is available under CC-BY-SA unless otherwise noted.