Start a Wiki
My Super Psycho Sweet 16 is an MTV Original Movie and the first Super Psycho film. Due to lack of popularity, it had a very limited run in the Movie Theater's on October 15th, a week before it premiered on MTV.

A spoiled teen, Madison Penrose's sweet sixteen is coming up. She wants to have her birthday party at the Roller-Dome, a once popular roller-rink with a violent history to match. Madison (Julianna Guill), her father (Ric Reitz) and the party planner (Chad McKnight) walk in. Madison sees that the Dome is filled with items that had been put in storage. She and her father walk out, leaving the party planner by himself, he hears a strange noise and asks if there's anybody there.

The scene later switches to 1999; Charlie Rotter (Alex Van) is the owner of a popular teen hang-out called the Roller-Dome, the home of many birthday parties. Charlie is the so-called "Lord of the Rink." As he does his usual job, an ungrateful teenage boy named Craig (Damien Haas) is having his birthday party there. He does so much as to smack the cake out of Rotters hands, and hitting his mask off, humiliating him in front of everyone including his daughter, Skye (Lauren McKnight).

Later that night, Craig and his girlfriend, Karen (Brytni Lavendar), break into the Roller-Dome. While skating, Craig's girlfriend skates off into the darkness. Craig notices that she hasn't returned, he slowly skates to where she was seen last. The lights around the ring start to abruptly turn off as he see's an angry Rotter dressed up as the "Lord of the Rink" having killed his girlfriend. Panicked, Craig attempts to run away, but trips on a pool-stick, that he ironically broke himself and threw onto the rink. Rotter catches up to him, and kills Craig with the other half of the pool stick, that had looked like a jousting pole. Skye witnesses the murders and calls the police. Shortly after, the police arrive and Rotter runs off. They find him in the basement, where he says, "I gave them what they deserved." The police arrest him immediately, and upon arresting him, several officers discover that four more bodies have been dismembered and stuffed into an oil bin. News reports spread all over the place, informing everyone about the murders. Rotter apparently dies in a crash involving the police cruiser.

Ten years later, Skye Rotter is an outcast, tortured by her classmates because of what happened a decade ago. One day she grabs the attention of Madison's ex-boyfriend, the popular Brigg Jenner (Chris Zylka), whose friend Kevin (Joey Nappo) teases Skye by calling her a "freak." Brigg laughs at Skye's clever comebacks, which accuse Kevin of being gay. The two have a "moment" as Madison's friend Olivia (Maia Osman) watches. Olivia warns Madison of this, while Skye's best friend Derek (Matt Angel) and her try to figure out whether or not to make a big deal out of the two talking. Skye later finds out after swimming that her gym locker has been trashed by Madison, Olivia, and Chloe (Susan Griffiths). Madison's "supposed" friend Lily (Leandra Terrazzano) shows up and tells Skye who trashed her locker. She admits that she really does not like Madison and the reason why Madison is attacking her is because she talked to Brigg. She tells Skye that she should hook-up with Brigg to get revenge at the party, which she states will be the "party of the year."

Skye, in nothing but a towel and a one-piece bathing suit, tries to leave the building. Unfortunately she runs into Madison, Olivia, and Chloe. Madison accuses her of scamming on her boyfriend, and warns her to stay away. She also tells her that she's a nobody, and that if she died, the yearbook wouldn't have wasted an inch of space on her. Madison, Olivia, and Chloe leave to go shopping. Madison's dad tells her that there's been a change of plans, and that he flew in a designer from Los Angeles. Excited, the girls drive off. Skye then walks home in her swimsuit and towel. Brigg drives by her, slows down, and offers her a ride home. While driving, Brigg asks Skye to hang out Saturday night.

The next day, Madison hands out invitations to her Sweet Sixteen. Having invited Brigg, it interferes with his plans with Skye, who is unsure of crashing Madison's party regarding what her father did. Brigg goes to Skye's house and explains to her that he has to go because him and Madison have history, and that he'd make it up to Skye. Skye tells him that they both know that this isn't going to work because he's popular and she's not. Brigg kisses Skye and lets her know that he wants to spend more time with her after Madison's party, and promises that they will go out. While Brigg leaves, Derek walks out on to Skye's porch asking if it was him. Skye then replies, "You still wanna crash that party?"

Lily leaves a secret opening for Skye and Derek behind the roller rink so they can sneak in. The two sneak in without a hitch and things then seem fine at the party until the party planner, who also hits on Madison, gets killed by Charlie Rotter. Skye finds Brigg and they skate together. Derek and Lily are chatting and she asks him to go get some fruit punch to mix with her Vodka so they can party. Derek walks off to go get the punch but Kevin sees Derek, and locks him in the basement. After warning Madison of Derek and Skye's appearance, Kevin takes Rotter's "Lord of the Rink" costume, and decides to play a trick on Skye by standing up in the mezzanine of the Roller-Dome. Skye spots Kevin, thinking that it's actually her father, Kevin laughs and mocks her as a stunned Skye runs downstairs out of the mez. Kevin is then choked, and beat to death by Rotter, who then finds his mask on the floor, and puts it on.

Derek, still locked in the basement, is let out by Lily, who is drunk and ends up making out with him. Chloe has a plan of hiding in the bathroom stall with a fire extinguisher and waiting for Skye to walk in so she can assault her with it. Olivia proceeds to dump one of her drinks on Skye's lap, so that she will have to wash up in the bathroom. Brigg, trying to find Skye, ends up in the VIP room, and Madison ambushes him, throwing herself at him and kissing him, Skye walks in on this, and leaves the room upset. Brigg then tells Madison that he doesn't want her and leaves. Meanwhile, Chloe is waiting for Skye, and hears what she thinks is Skye walking in. She comes out, extinquishing Skye. Instead it turns out to be Rotter, who beats Chloe to death with the fire extinguisher.

Lily decides to key Madison's car for a birthday present. While she is keying the words "Happy Sweet 16" into the hood, the car revs up and starts chasing after her. She is rammed into a brick wall but escapes. Lily runs up to a stairwell, and tries to escape to the street ahead, by trying to climb over a gate. Rotter catches up to her, and kills Lily by slitting her throat with a sword. Skye runs off to her dad's old office and calls Derek letting him know she wants to leave. Brigg then finds her and tries to explain what happened, while Skye tells him "This is the freak show and you're a part of it." She leaves.

While Madison's birthday cake is being brought out, Olivia goes to the bathroom to find Chloe, thinking that she's hooking up somewhere, she uses one of the bathroom stalls. She looks down and discovers blood on the floor. She looks through the bottom and finds Chloe dead. She tries to warn everyone else, but Rotter decapitating her, and her lifeless body skates and knocks over Madison's birthday cake. Frightened, everyone leaves, except Madison and Skye. Madison accuses Skye of ruining her party as they're being chased by Rotter. While running they find the party planner gutted. Brigg runs back in for Skye, and they run up to the mezzanine, trapped. Derek flashes the spotlight in Rotter's face, temporarily distracting him while Skye and Madison escape. As the girls reach the dance floor below, Brigg is thrown from the mezzanine above. As Skye, Derek, and Madison are running out, Rotter grabs Madison and slams her head into a party table, knocking her out. Rotter catches up to Skye and Derek at the door and strangles Derek. Skye begs her father to spare him, and Rotter does so by throwing him out the door, locking the two inside.

Madison wakes up, in the basement with Skye, their hands both tied to a table. Skye tells Madison that she is a "bully". Rotter unties Skye and tells her to kill Madison. Instead, Skye stabs Rotter in his leg, and tries to untie Madison. Madison insults her while they're trying to get out. Once untied, Madison selfishly knocks over Skye in order to get to the door, but she trips over Rotter. Learning Madison's evil heart, Skye locks Madison in the cage with Rotter, and tells her, "Have a super birthday, Madison", and leaves. As Rotter is getting up, Madison insults Skye as she is going up the steps. Madison's throat is slit by Rotter and is placed in the a chair with a party hat on her head. Skye leaves the building, and as police show up and Derek excited to see Skye okay, leaves town with Madison's brand new car.

A few days later, Brigg has a nightmare that he wakes up in the hospital, injured. Skye tells him he's been out for days, and that she came back for him. Then she stabs him to death while crying to her father. It turns out to be a dream as he wakes up frantic in the hospital, wanting to see Skye, the nurse tells him that no one has seen her. Saddened, he turns over on his side, only to see a picture that Skye drew on the stand next to him, revealing that she was in the room while he was unconscious.

There is an uncut version (DVD and ITunes), and cut version of the movie. Mainly the amount of gore shown, but in detail the cuts consist of: 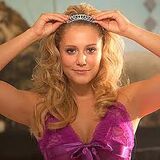 Add a photo to this gallery
Retrieved from "https://mysuperpsychosweet16.fandom.com/wiki/My_Super_Psycho_Sweet_16?oldid=4944"
Community content is available under CC-BY-SA unless otherwise noted.